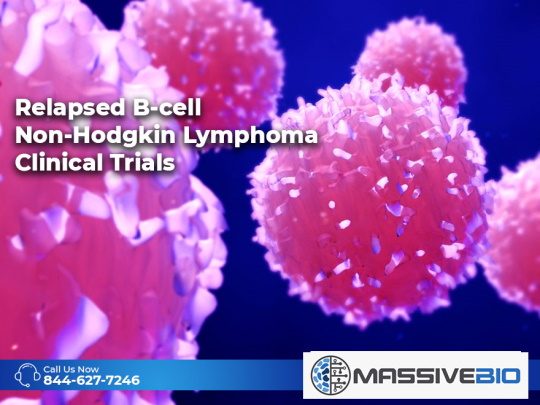 Diffuse Large B-cell lymphoma (DLBCL) is a fast-growing and aggressive type of lymphoma. DLBCL is slightly more common in men than in women, but common for both genders.  It can grow in lymph nodes or outside the lymphatic system, in the digestive system, testicles, skin, bone, brain, breast or thyroid glands. The first sign of DLBCL is often swelling of the lymph nodes in the neck, armpits and groin. Other symptoms for DLBCL may include sweating, fever, loss of appetite, and shortness of breath.

What is Relapsed B-cell Non-Hodgkin Lymphoma?

Relapsed B-cell Non-Hodgkin Lymphoma is the recurrence of lymphoma in remission. Relapsed DLBCL can result from the regrowth of hidden lymphoma cells that remain in the body after treatment. Usually relapsed DLBCL occurs 2 to 3 years after the first remission treatment. Life expectancy in untreated relapsed DLBCL is 3 to 4 months.

Relapsed DLBCL is a treatable disease. The treatment process includes chemotherapy, stem cell transplantation supported by intensive chemotherapy, targeted therapy, CAR-T cells, and combinations of these treatments. Combining these treatments may increase the overall effectiveness of the cancer treatment. Relapsed B-cell Non-Hodgkin Lymphoma clinical trials offer hope for patients who are too advanced or not responding to treatment. However, the effects of these treatments will differ for each patient. Before applying combined therapy, clinical trials or standard therapies, all risk factors should be evaluated.

DLBCL treatment begins immediately after its diagnosis. Chemotherapy and monoclonal antibody targeting are the basis of CD20 therapies. The CD20 molecule is a protein found on the surface of lymphoma cells. The disease is treated by using drugs that target these molecules. Application of R CHOP (a combination chemotherapy regimen) treatment for DLBCL in cycles of 21 days is one of the most common treatment options.

Many new individual and combined treatment modalities are being investigated by clinics for newly diagnosed or relapsed patients. Some of these treatments, including MOR208 (Revlimid), Bruton tyrosine kinase (BTK) inhibitors, bi-specific antibodies (e.g. REGN1979), and histone deacetylase (HDAC) inhibitors, with and without B-cell lymphoma 2 (BCL2) inhibitors with lenalidomide, provide promising developments. The Xpovio drug, which prevents the transport of proteins that feed cancer cells, is also being developed. In addition, many relapsed B-cell non-Hodgkin lymphoma clinical trials are currently active.

Clinical trials are a hope for patients in advanced stages or do not respond to current treatments. To learn more about clinical trials suitable for your disease, and how we use artificial intelligence to advance research, you can contact us.