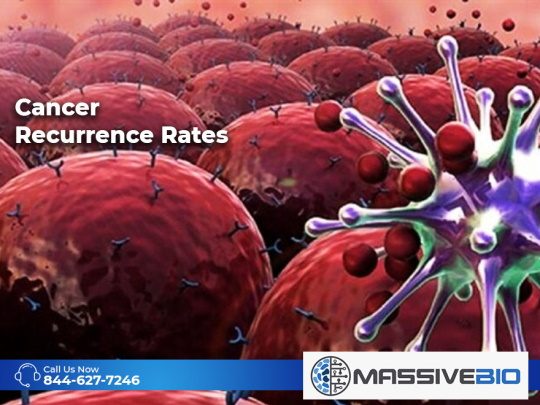 What are the Cancer Recurrence Rates and statistics? Cancer recurrence is when cancer is found in a patient after treatment has been completed and a period in remission has passed. When cancer recurs, it can either come back in the same location as the initial tumor or in another part of the body. A biopsy will be required to determine if it is a recurrence or a new cancer. If the biopsy proves that it is the same primary cancer as the patient had previously, even if it recurs in a different location of the body, it is known as a cancer recurrence. Alternately, if the biopsy reveals a different cancer type, it is known as a second primary cancer. While not as likely as a cancer recurrence, nearly one in five cancer cases diagnosed today are a second primary cancer.

For both a cancer recurrence and a second primary cancer, treatment can be more difficult than the previously. Physicians recognize that standard treatments, such as radiation and some chemotherapies, can increase the risk for developing additional cancers. There are ongoing clinical studies helping refine treatments to decrease long-term new cancer risk.

What Are the Types of Cancer Recurrence?

After a patient’s initial treatment is completed, cancer cells may still be inside the body that are undetectable, but they can eventually grow to a point where they can be detected. The different types of recurrences cancer patients may develop include:

Local recurrence: The cancer is back in the same place as the original tumor.

Regional recurrence: The cancer is back in the lymph nodes nearby the original tumor’s location.

Distant recurrence: The cancer has spread to a different location than the original tumor. These tumors usually recur in the lungs, liver, brain, or bones. When cancer spreads to other parts of the body it is labeled as metastatic. For example, if the cancer originated in the lungs and is then detected in the brain, it is still called metastatic lung cancer.

What is the risk of Cancer Recurrence Rates?

It is difficult to determine one’s risk of having a cancer recurrence. Every individual has different factors that can increase or decrease the risk of a cancer recurrence; therefore, recurrence rates can be broad. The rate can be adjusted according to the type of treatment, length of remission, and subtype of the tumor. It is important to speak with your physician to learn your exact risk of recurrence or secondary tumor based on your medical history and follow the guidelines for management after you are in remission.

Breast cancer: Women with breast cancer have an overall 30% chance of recurrence. Many cases happen within five years of completing the initial treatment.

Cervical cancer: Of those with invasive cervical cancer, an estimated 35% will have a recurrence. For those with an early-stage diagnosis, the cancer is more easily treatable, therefore, the recurrence rate is lower.

Lymphoma (DLBCL): 30-40% of patients have a recurrence of non-Hodgkin’s Lymphomas most common subtype, DLBCL.

Prostate cancer: Within 5 years, 20-30% of prostate cancer patients will have a recurrence following the completion of initial treatment. A PSA level is performed via a blood test to monitor the protein level in the blood that is associated with prostate cancer.

Lung cancer: Overall, 30-75% of lung cancer patients will have a recurrence, but it depends on the subtype. For example, non-small cell lung cancer has a slightly lower recurrence rate of 30-50%.

Pancreatic cancer: 36% of patients will have a recurrence within one year after surgery is performed.

How to Monitor the Patient’s Condition After Treatment?

After initial treatment is completed, a physician will schedule regular appointments to monitor the patient’s condition and look for any signs of recurrence. Depending on the cancer type, most recurrences happen within 2-5 years of completing treatment. Other cancer types, such as breast cancer, can recur after 10 years. However, each day that goes by decreases the risk of the cancer relapsing.

Fear of cancer recurrence is the main concern for cancer survivors post treatment. According to the American Cancer Society (ACS), 60% of 1-year cancer survivors had moderate to severe concerns about their cancer recurring. This rate is thought to be higher for younger survivors. Also, caregivers report being concerned potential disease recurrence. To combat this fear, it is important to speak to your physician about your risk and what can be done to prevent additional risk factors.