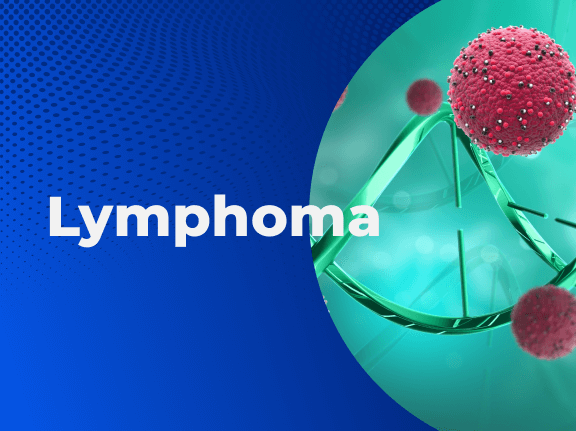 Lymphoma is a cancer that starts in the cells that are part of the body’s immune system and can begin in lymph nodes in many parts of the body. There are five different types:

The most common symptom of lymphoma is a lump under the skin, usually in the neck, under the arm, or in the groin. This is caused by an enlarged lymph node that does not hurt, and might get bigger over time, or new lumps might appear elsewhere. Swollen lymph nodes are more often caused by infection but react differently. When they swell due to infection, they usually hurt when touched, and go away when the infection does. Less common symptoms caused by lymphoma include: fever without infection, drenching night sweats, quick unintentional weight loss, itching fatigue, and loss of appetite. Finally, if lymphoma affects lymph nodes in the chest, this can lead to coughing, and trouble breathing. Sometimes, lymphomas do not cause any symptoms until they’ve grown quite large. Many of the symptoms can also be caused by other conditions but should be checked by a doctor to determine the cause

Common signs and symptoms are determined by the location of the lymphoma in the body and include:

There are no screening tests to detect lymphoma early. The best way to find lymphoma early is to look out for possible symptoms – specifically enlarged lymph nodes that do not cause pain.

Most people who have a lymphoma see a doctor because of a lump that won’t go away, or because they do not feel well. Confirming a lymphoma diagnosis will then begin with a medical exam of the lymph nodes and other parts of the body that might be infected including the spleen and liver. The doctor might also order blood tests to look for signs of infection or other problems.

Researchers have found several factors that can affect a person’s chance of getting NHL and HL, but it is not always clear why these risk factors increase risk. Having these risk factors does not guarantee cancer either. Factors include but are not limited to:

After someone is diagnosed with lymphoma, doctors will try to figure out if it has spread, and if so, how far. This process is called staging. The stage of a cancer describes how much cancer is in the body. There are 4 stages, written with roman numerals.

Stage I: the lymphoma is in only 1 lymph node area or lymphoid organ such as the tonsils or the cancer is found only in 1 area of a single organ outside of the lymph system.

Stage IV: The lymphoma has spread widely into at least one organ outside the lymph system, such as the bone marrow, liver, or lung.

Lymphoma treatments depend on several factors and which type of lymphoma the patient has. The most common treatments are chemotherapy and radiation therapy, and depending on the case, one or both treatments will be used. Certain patients with HL are treated with immunotherapy or with a stem cell transplant, especially when other treatment hasn’t worked. Surgery is rarely used as a treatment option for HL. Treatments for NHL include the same treatment options, but also include targeted therapy drugs, and sometimes surgery.