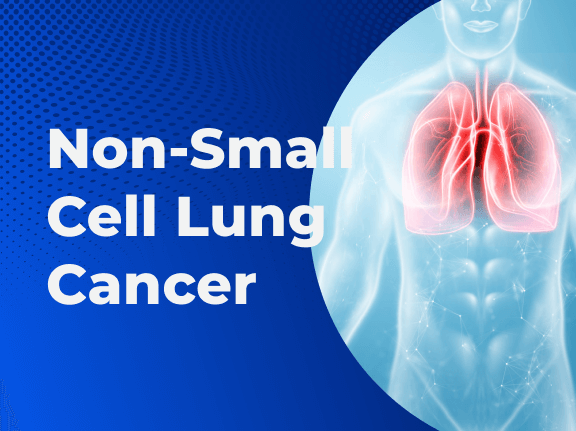 Non–small cell lung cancer (NSCLC) accounts for 85% of all lung cancer cases in the United States. NSCLC is the most common form of lung cancer and is a general term for several different types of cancer in the lungs including:

Symptoms for NSCLC can differ for each patient, but they generally include:

It is believed that 90% of all lung cancer cases are caused by smoking. However, there are cases of lung cancer for those who have never smoked before. Some of these cases can be attributed to gene changes, or mutations that are either inherited or developed over one’s lifetime. Although smokers can develop NSCLC, there is a larger number of non-smokers who have NSCLC compared to small cell lung cancer.

Ask Our Experts Your Questions Now

The best way to prevent the development of lung cancer is to avoid smoking, or if you’ve already started, then quit smoking. You should also avoid the other risk factors as well as have a balanced diet and exercise to maintain a healthy weight.

NSCLC is a type of cancer that begins with the epithelial cells of the lungs, which is the inner lining of these organs, including the breathing channels. These cancer cells initially appear only as nodules. As it grows, it can invade the surrounding structures; from the lymph nodes in the chest, spreading to distant organs.

The most common types of NSCLC are called based on histology (the type of lung tissue):

Squamous cell carcinoma: Caused by squamous cells that look thin and flattened like herringbone. It is also called epidermoid carcinoma. This lung cancer begins in thin, flat squamous epithelial cells that line the airways of the lungs.

Adenocarcinoma: Caused by cells that show secretory properties. The main reason for the development of lung adenocarcinomas is smoking tobacco, but this type of cancer can often occur in non-smokers, women and younger ages.

Large cell carcinoma: A lung cancer, when viewed under a microscope, with large and abnormal cells.

Adenosquamous carcinoma: Cancer that starts from cells that appear flattened under a microscope and also has glandular features.

Pleomorphic, sarcomatoid, or sarcomatous carcinoma: A group of cancers that spread with different types of cancer cells under a microscope.Carcinoid tumor: Cancer that grows slowly, starts from cells (neuroendocrine) that secrete hormones as a result of nervous stimulation.

What is Early Stage, Advanced Stage?

Once cancer diagnosis is confirmed, its stage should be determined. Staging is a classification made by doctors based on the spread of cancer. Non-small cell lung cancer has five stages, from zero to four. As the number grows, the severity of the disease increases. The appearance and treatment will vary depending on the stage.

Stage 4 is not generally curable, so its treatment is aimed at reducing symptoms, and to prolong life by using targeted drugs, chemotherapy and/or immunotherapy. Lung cancer at a small early stage usually does not cause symptoms. When the disease grows, it interferes with the normal function of the lungs, causing symptoms such as hemoptysis (coughing blood), shortness of breath or pain. It can also damage surrounding tissues.

40% of NSCLC patients are diagnosed at advanced stage. In stage 4, the cancer has spread to distant parts of the body. Organs such as the liver, heart, bones, brain or liver may be affected. The prompt treatment of these patients is critical because advanced stage non-small cell lung cancer affects multiple organs and the tumors have grown and may compromise their function.

The treatment decision depends on the patient’s overall health, stage of the disease, and the subtype of lung cancer the patient has. The common treatment options for NSCLC patients often includes:

Radical surgery is the standard of care for fit, stage I NSCLC patients. Chemotherapy is used with concurrent radiation for some locally advanced cancers, and palliative chemotherapy for metastatic disease to relieve symptoms and improve quality of life.

Immunotherapy has revolutionized the landscape of NSCLC targeted treatments, significantly prolonging the overall survival of advanced stage patients. Immunotherapy drugs approved to treat lung cancer belong to a class of drugs called checkpoint inhibitors. Doctors use several targeted therapies to treat some advanced non-small cell lung cancers, either alone or along with chemotherapy.

There are approximately 835 clinical trials for non-small cell lung cancer patients recruiting patients in the United States. With such a long list of trials, it is difficult to know which one is the most beneficial for you. Our team of patient advocates, case managers, and our artificial intelligence based clinical trial matching system will find the best option for your individual case.